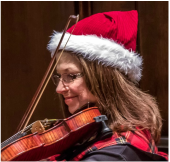 Vicki Whale (1959-2016)
On July 23, 2016, at the end of a family vacation in Europe, violinist Vicki Whale passed away of cancer in Zurich, Switzerland. Vicki played first violin with CSO for almost 30 years. She was a loving mother, a dedicated public school music teacher, and an accomplished musician. Vicki had faced three bouts of cancer across the decades, and every time she fought the battle with unfailing optimism and continued to play the violin. She leaves many friends in the CSO who will miss her upbeat personality.

Shirley Westhal Berens (1942-2015)
Shirley Berens, CSO cellist since 2002, passed away on August 25, 2015 after a 16-month battle with cancer. For the past several years she was the orchestra's publicity chairperson, maintaining contacts with local newspapers and radio stations to ensure that the orchestra's concerts were announced to the general public. Shirley's upbeat demeanor and dedication to all that she undertook endeared her to many.
David Sykes (1933-2015)
Long-time member David Sykes played string bass and was the CSO Board Treasurer for over 25 years until his passing on May 8, 2015 at the age of 81. When his health prohibited him from continuing to play bass with us, he became a familiar face in the Little Bridges lobby, greeting people, handling CD sales and donations, and distributing programs. His contribution to CSO was immeasurable, and we will miss him dearly.

Retired Associate Conductor Dr. Gary Iida (1942-2013)
Dr. Iida joined the CSO in 1975 and never left. He was a trumpeter, percussionist, conductor, Concert for Young People maestro, witty colleague, fine musician, and -- his favorite role -- Elvis impersonator.  His courage facing his debilitating illness (Parkinson's) for almost two decades inspired all who encountered him.  He was especially effective as a role model when he conducted from his wheelchair, especially at his favorite concerts -- the ones for children.  For a number of years Dr. Iida had been coming to CSO concerts in his wheelchair or with his walker to help hand out programs in the lobby.  This he did at the Oct. 20, 2013 concert shortly before he passed away. Dr. Iida was a beloved member of the CSO family and will be greatly missed.